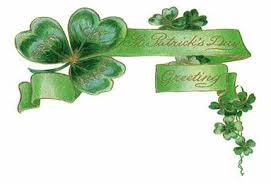 I’m not Irish, and I’m not catholic, but I am moved by the true story of St. Patrick, because it  is one of great perseverance and faith, and it is an inspiring example of how rewarding it can be to make a difference in the lives of others.

In short, St. Patrick, whose real name was Maewyn Succat, was not Irish, but English. He was born to a wealthy Christian family,  and as an early teen, he was kidnapped and taken to Ireland to become a slave. His name was changed to Patrick. As a slave in Ireland, he witnessed the pagan practices of the Irish, but remained true to his Christian faith, and it is said that he prayed up to a 100 times a day.

So it’s not about luck, and it’s not about green beer.  St. Patrick’s Day is about the faith and sacrifice of a man who shared his faith, and the love of God, with a nation… and for that we remember him today.