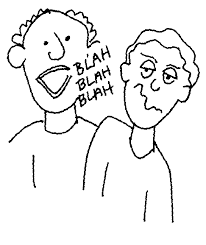 “Sticks and stones may break my bones, but words can never hurt me.” This is so-o-ooo not true! In fact, some words can hurt worse than sticks and stones, and when you’re praying for a miracle, what you say or don’t say really does matter…

Have you ever noticed how, the moment you start talking about believing for a miracle, someone comes along, and starts giving you all the reasons why it will never happen? It’s usually not because they don’t mean well. Sometimes they just don’t want to see you get hurt or be disappointed, and sometimes it’s because they just can’t imagine such things coming to pass. Regardless of their intentions, these words, once embedded in your heart and mind, can strike a fatal blow to your faith.

It’s not only the words that you hear, that can hurt your faith, but also the words that you speak. Proverbs 18:21 says that; “Death and life are in the power of the tongue…” In fact, it would be better to say nothing at all, than to speak words of doubt or fear concerning what you are believing God for in your life. Luke 1;5-22 gives a perfect example of this. It speaks of Zacharias, and how the angel Gabriel told him that he and his wife, Elisabeth, would have a son.

Zacharias couldn’t believe it,.. and that’s just exactly how he spoke. He gave all kinds of reasons why this could not happen, like being too old, and finally, because he didn’t believe, he lost his ability to speak. God was going to perform a miracle in Zacharias’ life,and Zach’s words of doubt couldn’t be allowed to get in the way, so Zacharias would have to stop speaking , and God made it so that he would be unable to say a word, until the miracle of his son’s birth came to pass.

Later, in the same chapter, the angel Gabriel came to Mary with the announcement of Christ’s birth, and her response is one of faith,.. not doubt. She simply asks how this can be, because she’s a virgin. She doesn’t say that it can’t happen… She believes and submits herself to God’s will. Mary knew how to ponder things in her heart. Not only did she speak words of faith, saying, “Be it unto me according to thy word“, she also knew how to keep quiet, allowing God’s miracle to come to pass in her life.

When it comes to our faith, words really do matter.

One thought on “Sticks and Stones”